skip to main | skip to sidebar

An update (it's been a while)

In case anyone is wondering "what's happened to the whole US soccer book idea?" i'm still ploughing on with it. Full time work commitments have managed to get in the way, as usual, but the book is still lurking in the background, and is slowly but steadily nearing its completion. Since I last wrote, there have been several interesting developments in Major League Soccer.

Minor changes have included a customary team name change; Kansas City Wizards are no more, replaced by a more Euro-friendly sounding Sporting Kansas City. Still the same team, of course, although they have moved to a flashy new stadium, the LIVESTRONG Sporting Park. A more significant change has come in the shape of Montreal Impact, the latest addition to a League now containing 19 teams. One more and we might be looking at a switch to an English Premier League style set-up of playing every team twice, but with the play-off system as it is, we might have to wait a while for such a big format change.

With the transfer window in Europe ready to step up a gear, and with the rumour mill in full flow, some big names have been linked to MLS in recent weeks. Forget Barry Robson (Vancouver) and Kris Boyd (Portland), we're talking about the likes of Shevchenko and Ronaldinho. Ageing, yes, but having seen first hand what the likes of Claudio Lopez and Guillermo Schillotto could do in MLS, I'd bank on those pair tearing up the MLS in the short-term, should they decide to make the move.

I'll be keeping a closer eye on developments as I draw nearer to (finally) finishing the story of my own travels in the States, and my visits to Major League Soccer's finest. Despite the long, and sometimes arduous writing process, i've enjoyed recalling my exploits in the US & Canada, and still laugh out loud when I think about some of the characters I met along the way. From Daryll, the ex-Mormon / ex-marine / ex-convict I had the pleasure of sharing a hostel room with in Salt Lake, to the man whose arsenal of weapons I saw in a car boot in Kansas, to another ex-con on the bus to Dallas, I enjoyed it all.

Once it's finished, I hope you'll enjoy reading about them too.
Posted by Mike Oldham at 3:33 AM 2 comments: 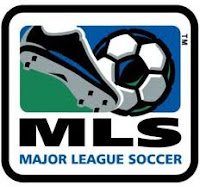 Since I last posted, MLS has continued to claw its way in to the sports pages of British papers and other media, albeit not quite making its mark on the very back pages.

Beckham's been on the move again, though his short stint at Tottenham will disappoint anyone hoping to see him turn out in the Premier League again. Insurance issues and a niggling injury meant Spurs weren't willing to fork out for him to play in just a handful of games, and he'll return to MLS and the Galaxy later this month.

Rooney has moved to New York Red Bulls. Unfortunately for NY fans, it's not Wayne but in fact his little brother, John, who will be scrapping for a place up front with Thierry Henry.

And in the pre-season, clubs have been busy filling their rosters with draft picks and free agents left, right and centre. Some of the higher profile movers and shakers have been Juan Pablo Angel's switch to Beckham's LA Galaxy Former Newcastle defender Didier Domi has moved to New England Revs, while 39 year-old Colombian national team goalie Faryd Mondragon, who signed for Philadelphia Union.

John Spencer, who I interviewed in Houston, has signed Arsenal defender Kerrea Gilbert as well as ex Man Utd and FC Dallas striker Kenny Cooper for his debut season as Portland Timbers' head coach. And New England signed Diego Fagundez who, at 15 years of age, is the youngest player to sign an MLS contract since Freddy Adu.

With all this movement it looks like exciting times ahead for MLS, who welcome Portland and Vancouver to the league this year.

'So what about the book?', I hear you cry. Well, with time rolling on, I am happy to report that I've been making excellent progress with my writing. I feel I am now in the 'pre-season training' stage of the process (though I am perhaps not yet quite fully match fit!) and hope to finish the project in the coming months. Once it is finished, you will be the first to know!
Posted by Mike Oldham at 2:08 AM 2 comments:

Since arriving back in the UK from my trip round Major League Soccer, MLS has continued to hit the sports pages on these shores, and is gaining an increasing amount of coverage despite several British players leaving the league.

This may be in part due to David Beckham's return from his loan spell at AC Milan, together with the very public criticism of him by Galaxy team-mate Landon Donovan in the Grant Wahl book 'The Beckham Experiment'.

The cause also been helped by the excellent performance of the US national team in the Confederations Cup this summer, where a win over European champions Spain raised a few eyebrows, before they let a 2-0 lead slip against the much-fancied Brazil in the final.

But while Danny Dichio (Toronto FC) and Darren Huckerby (San Jose Earthquakes) announced their retirement in recent weeks, and Rohan Ricketts (Toronto FC) and Ian Joy (Real Salt Lake) returned to Europe to continue their careers, it's clear there is still a strong British following for Major League Soccer despite a lack of British players.

The performances of Houston Dynamo's Scottish-American midfielder Stuart Holden have seen him earn his first caps (and goals) for the US national team, while Beckham's performances, despite a couple of blips including an incident where he confronted angry Galaxy fans, and a red card against Seattle, have seen his club mount a serious title challenge. Even Fabio Cappello has been impressed, including him in the last two England squads.

But there is plenty more to look out for in the MLS than Brits. Seattle's Colombian wizard Fredy Montero was recently linked with a move to Everton in the Premier League, after an explosive start to his career in MLS; last season's MVP Guillermo Barros Schelloto continues to defy his age and keeps banging in the goals for reigning champions Columbus; and US internationals Landon Donovan and Jeff Cunningham
have had no trouble finding the net either. Speaking of the net, you can even spot the ever-green Kasey Keller in goals for Seattle.

So with plenty to talk (and write) about, I'm going to carry on with this book. I'll keep you posted with how it's going...
Posted by Mike Oldham at 3:53 AM No comments:

Mike Oldham
Mike Oldham (@mwoldham) is a sports writer with experience in newspaper and magazine writing, as well as radio broadcasting. In 2009 he travelled through the United States & Canada to get an in-depth look in to Major Leaue Soccer, visiting the MLS teams and speaking to players, coaches, fans and media pundits to get an idea of what the League is like. Mike is currently writing a book about his travels, the people he met and some of the weird and wonderful sights of the USA & Canada, as well as what he learned about MLS. He hopes to complete the book in 2012 and once he finds a publisher, you'll be the first to know!